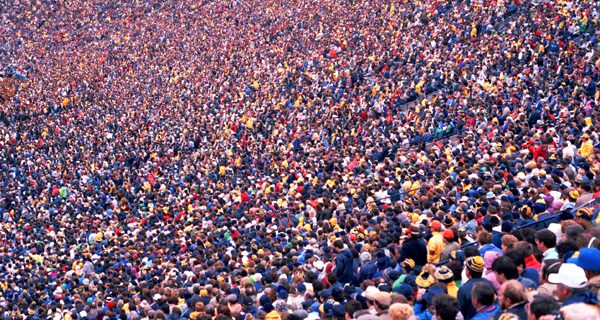 One of the things we are supposed to be celebrating in this era of social media, open-source everything, citizen journalism, and various forms of “super-enabling” Internet politics is how it frees us from having to rely on authority.

In the past, if we wanted news, it was fed to us vetted by a set of established (and establishment) media sources such as newspapers, magazines, radio stations and TV networks. While critics could sit on the sidelines complaining about the bias of this news source or the sensationalism of that one, the stories we read, listened to, watched and critiqued all had to pass through the hands of authority figures with titles like “journalist” and “editor.”

Police, government officials, and executives are other examples of authority figures that we have historically been able to obey or defy, but not generally avoid or get around.

Today, however, the tech in our pocket allows us to get our own facts, generate and communicate our own opinion, and even take political action without having to defer (or even pay attention) to these traditional sources of authority. In fact, much of the activism we now participate in online is specifically designed to jump over traditional authority or (as in the case of newspapers) bankrupt it by making it obsolete.

But much like the air in a balloon has to go somewhere when you squeeze one end, authority has a habit of simply flowing elsewhere once you start to strangle traditional sources of it. And in today’s era of distributed responsibility (or lack thereof), authority is more and more being invested in “The Crowd.”

It is the mass of Internet users, after all, who get to “vote” with their clicks, their re-links, their Likes and Recommends which of the hundreds of stories or editorials written by citizen journalists on any given topic you will ever notice. In theory, “the wisdom of crowds” means only material that is exceptionally well researched and written will float to the top. But that’s just one theory.

Another is that the skills needed to get your material to appear first on Google or reach 100,000 vs. 100 people are different from those needed to produce quality work, meaning the crowd that really gets to decide what becomes visible is made up of Search Engine Optimization (SEO) specialists, social media marketing gurus, or just those willing to put five times the amount of time needed to produce something into promoting it.

Increasingly, the Web is awarding not just self-promoters but those able to produce what a chosen audience most desires, whether that be carefully crafted and thoughtful commentary or a series of Tweets designed to entertain or outrage. And with each election cycle, the technological marvels we all take for granted move from being tools we use to cover a story to the story itself.

We’ve already seen how a candidate’s latest Tweets (or the Tweets of their followers or followers’ followers) have moved to Prime Time. But a more recent example of crowdsourced politics demonstrated some of the changes these new technology-enabled ways of interacting are changing not just campaign dynamics, but the brains of voters.

A few weeks ago, someone reviewing the faces of men and women sitting behind Hillary Clinton at a Florida rally realized that one of them belonged to Seddique Mateen, father of the killer who shot up the Pulse Nightclub a few months earlier. This led to an immediate crowdsourced effort to find similarly embarrassing faces within crowd shots at Trump events.

This kind of crowdsourcing photo-analysis has been used in the past to locate missing hikers or map remote locations by leveraging skills humans still do better than machines, such as pattern recognition and the ability to make complex associations. Such efforts have been rightly hailed as demonstrating the kind of discoveries that can be made when humans and technology are paired appropriately.

In the case of the political rally photo analysis just described, however, the conclusion was already in place before the discovery process began. Specifically, it was the task of Internet partisans to scan just photos of rallies of the enemy in order to find some face that would embarrass the candidate they can’t stand. And once that discovery was made, “research” was complete.

I’m guessing that those involved with such efforts genuinely consider themselves to be political actors, possibly even important players once their partisan analysis found its way onto equally partisan web sites where it was happily gobbled up by fellow partisans and generated outrage among partisans of the other side. But is anyone involved with any step of this process actually stopping to think, or at least ask some pretty obvious questions?

For example, does the candidate or his organization screen everyone who attends one of their events across all possible dimensions? If not, then what is to prevent anyone without a handgun from showing up and standing in front of or behind either Presidential aspirant?

When does someone’s physical proximity to a candidate imply something significant vs. an opening to apply the Association Fallacy?

Finally, why is that person within photo-shot of the candidate in the first place? Does it imply support, or are they just another self-promoter hoping for a image they can post on their own Facebook page or use to promote their latest blog entry?

The only interesting thing I read about the subject was this piece which questioned the whole meme of the candidate standing in front of a carefully constructed, demographically diverse montage of faces waving placards and cheering on cue. Given that the very element of the campaign being subjected to crowdsourced photo analysis might just be a means of manipulating the public through poll-tested imagery, shouldn’t we voters respond by trying not to be manipulated, rather than using the occasion to try to manipulate others?