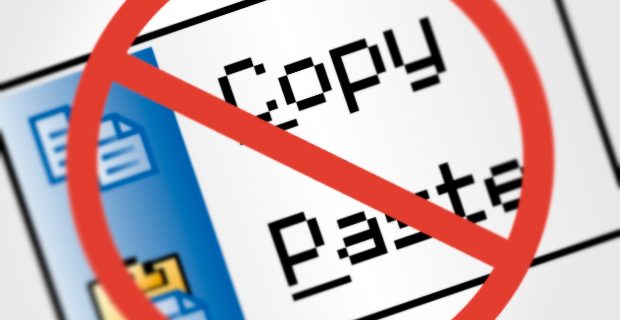 The big political news from last week was the Republican nominating convention and, if you judge the importance of stories based on time spent spinning in the news cycle, it seems as though the Yugist Event was Trump’s spouse allegedly lifting words from Obama’s during her brief speech at the start of the event.

“Plagiarism” was on everyone’s lips during Day 1 and Day 2 of RNC 2016, with allegations flying that Melania Trump either (1) relied on a lazy speechwriter or (2) lifted words herself that were originally written by/for Michelle Obama when the current First Lady introduced herself to the nation in 2008. This was followed by subsequent accusations that the Trump campaign was (1) covering up the “crime” or (2) incapable of getting even the simplest things right (which, naturally, made this a story about “competence” — and thus highly newsworthy).

In response, the Republicans came up with their own accusations that this was a non-story cooked up by the Clinton campaign in conjunction with a partisan media already in the bag for “Crooked Hillary.” Sticking with what’s worked, they relied on Argumentation from Outrage to demonstrate to the base that the opposition was ready to go after the candidate’s wife on trumped up charges (sorry about that) amplified by a media-Democratic echo chamber.

So where to go with this one?

Well we could look at the stories coming out of the academy regarding how Melania Trump’s talk provides a “teachable moment” to introduce students to the subject of plagiarism and how to avoid it. But given the general reaction to the Trump candidacy within academia, it might be fair to ask if these same lessons would have so spontaneously entered the classroom if accusations were being thrown at Democratic candidates, never mind their spouses.

Indeed, one reaction to the controversy came in the form of Republican claims that the media never followed up on similar accusations of plagiarism Hillary Clinton threw at Barak Obama during the 2008 primary race (although there were stories of how plagiarism charges helped to derail Joseph Biden’s presidential ambitions in 1988).

Before getting into such academic or he-said/she-said charges and countercharges, this critical thinking teachable moment might best start with actually reading the text in question.

Here is the critical passage from Melania Trump’s convention speech:

“From a young age, my parents impressed on me the values that you work hard for what you want in life, that your word is your bond and you do what you say and keep your promise, that you treat people with respect.

They taught and showed me values and morals in their daily lives. That is a lesson that I continue to pass along to our son. And we need to pass those lessons on to the many generations to follow. Because we want our children in this nation to know that the only limit to your achievements is the strength of your dreams and your willingness to work for them.”

And here are the words spoken by Michelle Obama from which Trump’s points were allegedly lifted:

“And Barack and I were raised with so many of the same values: that you work hard for what you want in life; that your word is your bond and you do what you say you’re going to do; that you treat people with dignity and respect, even if you don’t know them, and even if you don’t agree with them.

“And Barack and I set out to build lives guided by these values, and to pass them on to the next generation. Because we want our children — and all children in this nation — to know that the only limit to the height of your achievements is the reach of your dreams and your willingness to work for them.”

Upon first reading, the passages do indeed seem similar in terms of subject matter, word choice and cadence, although Obama’s is a bit more formally structured – making use of the rhetorical devices tricolon (a grouping your points or examples in threes) and anaphora (repeating a word or phrase for effect – in this case “even if you don’t” at the end of the first paragraph).

The other important thing that jumps out of both passages is that the speakers are delivering not political positions or policy pronouncements, but platitudes (I just used the rhetorical device alliteration, by the way). Now there is nothing wrong with platitudes (generally thought of as sentiments everyone is likely to agree on), especially if you’re a political spouse whose job it is to “humanize” the candidate. So the question we should be asking is whether such window dressing should be the subject of so much controversy.

If this were an election full of opportunities for the candidates and the public to debate the major issues of the day and determine how each presidential contender might deal with the problems we face at home and abroad, then perhaps a sideline argument over lazy or dishonest speechwriting by unelected spouses would provide an interesting distraction to an otherwise meaty and meaningful campaign.

The trouble is that this year’s election is between two candidates whose negatives are as sky high as their campaign bank accounts. Which means that they will be spending most of their time and money ginning up controversy regarding their opponents and trying to feed voters stories they prefer we think and talk about, in hope that we will not think or talk about matters they prefer not come up.

During the last election, I described how a Principle of Charity, which asks us to judge opponents based on their strongest and most substantial arguments vs. pouncing on irrelevant errors, can be used to raise the level of debate. But this principle can also help us determine what constitutes matters of substance worth arguing over.

In an era when lots of money will be spent on lots of professionals whose job it is to manipulate us into focusing on the storylines they prefer get lodged into our brains, perhaps the Principle of Charity will at least prevent us from distracting ourselves by gleefully gobbling up tales that ultimately add up to nothing.