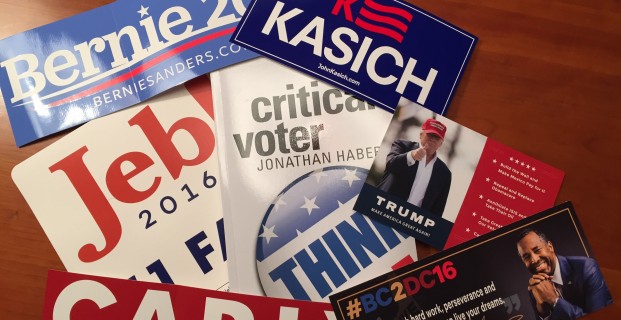 Just got back from the frigid Granite state with a dozen fewer copies of Critical Voter, having had the chance to put books into the hands of people at most of the campaign headquarters visited on Saturday.

Responses to the gift ranged from polite indifference, to warm thanks and offers of snacks, to promises that it would be passed onto the right people in the campaign to read. In short, no one called the cops (or, in the case of Ted Cruz, the Mounties) to throw us out of the building.

Fortunately, my traveling companion was a former New Hampshirian and veteran of many primary campaigns who spends time every four years trolling for memorabilia and opportunities to see as many candidates as possible in action. This provided the two of us the background knowledge needed to make some valuable observations regarding the state of the campaign in the first-in-the-nation Primary.

As you’ll read about in Critical Voter (which comes out February 1), background knowledge is a cornerstone component in any critical thinking exercise.

As my colleagues and ally Kevin deLaplante from Critical Thinker Academy has pointed out, you cannot apply logic or the various other critical thinking tools and techniques to bad data and expect to achieve understanding. Or, as I put it in Critical Voter: “As powerful as these tools and techniques might be, they’re not going to help much if you don’t know what you’re talking about.”

Certain background knowledge can help provide answers to questions raised by sense data. For example, one could conclude from encountering an empty or locked campaign HQ that the candidate had given up on New Hampshire and was concentrating all of his or her firepower on Iowa. But additional data (like the calendar we had which showed which candidates were busy making campaign stops throughout the day) pointed to alternatives, such as campaign operatives having more important things to do with their time than sit in an office and wait for some kook would show up to give them a free book.

Deep background knowledge of the mechanics of campaigning also allowed my friend to see things that I (like others who do not share his level of experience) would not, even if we might be looking at the same situation.

For example, to me a large campaign office stocked with lawn signs and boxes of mailers waiting to be addressed and sent out seemed like a sign of a healthy operation, ready with material at hand to make a big push in the last weeks of the campaign. But my more knowledgeable friend immediately realized that lawn signs stacked to the ceiling at headquarters were not where they should be (on lawns) two weeks before the vote. Similarly, boxes of unaddressed literature sitting on tables indicated to him a lack of volunteers to do the labeling.

Both my (likely wrong) analysis and my friend’s (more likely right) one demonstrate the use of inductive reasoning which moves from known data to likely conclusions. While less air-tight than deductive logic (a topic for another time) induction is also what we humans operating in the real world tend to rely on to make sense of what we observe and experience in our daily lives.

I hope this post begins to give you a sense of how election politics can be used to become aware of and hone your critical thinking skills. Next time, we’ll try a similar exercise that uses a real-live campaign event (a Town Hall meeting with one of the candidates) to think about the important topic of argumentation.