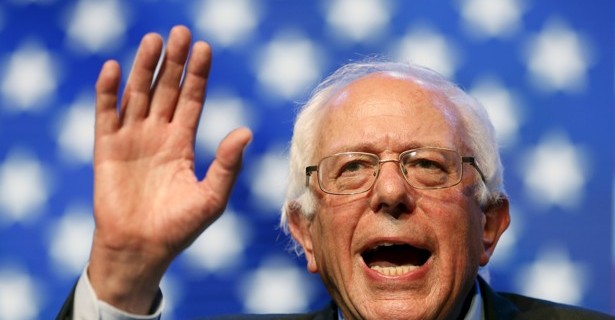 I suspect that even those who are not Bernie boosters were less than satisfied with my recent analysis which used Aristotle’s Square of Opposition to argue against a Sanders campaign operative’s explanation of how the Vermont Democrat, if elected, would usher in a Congress ready to enact his ambitious and controversial programs.

That’s probably because such an analysis required translating a statement given in normal human language, namely the spokesperson’s claim that “any election big enough to elect Sanders would be big enough to bring Democrats back in control of Congress,” into the more awkward AEIO format (All S’s are P’s, Some S’s are not P’s, etc.) needed for traditional Aristotelian reasoning.

“All dogs are animals,” sounds fine in such a structured format, but “”All elections in which Bernie Sanders is elected President of the United States are elections in which Democrats will be elected to control both houses of Congress” can leave the impression that problems might be arising out of the translation of the original statement, rather than logical problems with the statement itself.

So let’s try a different method of logical analysis that might also help us deal with an argument for which there is not yet sufficient data to determine certain truth or falsehood.

Just to recap, the original argument came from a Q&A with a Bernie Sanders supporter who, in response to a question of how Sanders expected to enact his economic campaign proposals, responded that “any election big enough to elect Sanders would be big enough to bring Democrats back in control of Congress.”

In this case, the spokesperson’s statement is an argument, one which requires translation to turn it into a more formal argument that can be analyzed for quality.

In Aristotle’s time, the end product of such a translation would be a syllogism in which two premises (claims the arguer is asking you to believe), written as AEI or O statements (All S’s are Ps, etc.) are followed by a conclusion (a statement the arguer claims you should or must believe if you accept his or her premises).

Fortunately, we can still get a lot of mileage out of an argument that is not so straightjacketed as one of Aristotle’s syllogisms, one which simply lists out the premises followed by the conclusion. For example, here is the argument the Sanders spokesperson is making translated into a structured format:

Conclusion: If Bernie Sanders is elected President, he will have the Congressional support he needs to pass his economic programs.

This more structured argument was designed with some important qualities in mind. First, it is economical in that the number of premises is kept to a minimum. While a syllogism is limited to just two premises, the informal process we’re using allows you to have more than two. But, as we’ll see in a minute, each premise provides an opponent a line of attack which is why your translation should include the fewest number of premises needed to state your case.

This argument is also charitable in that it accurately reflects what the arguer was trying to say. Confirming this would require you to pass your translation by the original arguer for approval, but even if such a step is impractical, it is still incumbent upon you to do your best to capture the content and spirit of the original argument accurately in your translated version, rather than generating a self-serving reconfiguration or parody.

With our Sanders argument structured properly, as well as being economical and (hopefully) charitable, let’s put it through a couple of tests.

In this case, I went out of my way to translate the original statement about Sanders into a valid vs. an invalid argument, and I think if you read it carefully you will find that there is no way to accept the premises and then reject the conclusion.

Now some of you might find my translation too charitable, in that you can think of alternative reasonable (even charitable) translations that would be invalid. But it is generally in our interest to turn statements made in normal language into valid arguments since doing so tends to expose weaknesses related to a second test: a test for soundness.

What is soundness? Well remember when I said that an argument asks you to accept a set of premises? But why should you? After all, one or more of those premises can be false, or at least questionable by a reasonable person. And if even one premise can be dismissed as incorrect or unreasonable, then the entire argument fails due to lack of soundness.

In this case, nearly every premise in the Sanders argument is debatable. For example, Sanders might be voted into office by a majority of Left-leaning Democratic voters who believe in his economic programs. But he might just luck out and be the only candidate left standing if Hilary gets indicted over the summer, after which Sanders wins against a Donald Trump who captures the Republican nomination but never manages to get those beyond a minority base to vote for him.

If that scenario seems unlikely, how about one where voters vote for divided government, giving Democrats the White House, but keeping Congress in Republican hands. Such a scenario (which flies in the face of Premise #2) is not just plausible, but is pretty much how things have gone over the last 30 years.

Similarly, how many Presidents struggled to earn support from their own party for aggressive reforms? This too is both plausible and historically precedented, meaning the third premise is also highly questionable.

Feel free to disagree with one, two or all three attacks on the premises of the argument. But if even one of them is acceptable — or even just reasonable — then the entire argument fails due to lack of soundness.

Keep in mind that nothing you have read proves that the conclusion to this argument is false (something we cannot in fact know until the election takes place). But it does show that the argument claiming the likelihood of the conclusion is not strong enough to do so.