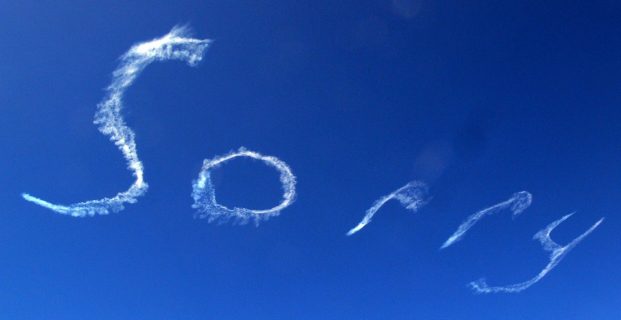 My tribe has recently been through the High Holy Days, during which we are supposed to reflect on our failings from the previous year. Such reflection puts us in the position to make amends for what we might have said or done that harmed others, or simply fell short of what we should expect of ourselves.

As with most religions, atonement within Judaism combines sincere appreciation that one has done wrong, honest acknowledgement of that fact to oneself and others, and a willingness to make amends. Even more importantly, one must commit to resist the same failure when the situation leading to the original misstep occurs.

Unsurprisingly, this year’s election campaign has provided religious leaders endless examples of how not to behave when confronted with one’s misdeeds or shortcomings.

Rhetorical techniques for avoiding responsibility are fairly well established, and are only more pronounced this year due to (1) both candidates having a lot to apologize for; and (2) each of them being pretty weak in the rhetorical-skills department. This makes their attempt to use these responsibility-avoidance techniques pretty obvious, making them easier for we critical-thinking students to study.

For example, when confronted by recorded evidence of admitted infidelity and abuse of women, Donald Trump began by redefining his behavior as “locker-room talk,” implying that such talk was not married to vicious and potentially criminal action. Speaking of marriage, we also saw the familiar sight of a spouse coming to the rescue by demonstrating that she was not appalled by her husband’s behavior (implying that the public has no right to be appalled for her).

We saw this same strategy employed by the current Democratic nominee when it was her husband in the hot seat for similarly reprehensible behavior. In that case, a more successful strategy involved changing the subject to a discussion of “vast right-wing conspiracies” and Republican overreach through an impeachment process that turned then-President Clinton’s atrocious personal behavior into a constitutional crisis.

The current potential President Clinton II has also reached into the rhetorician’s bag of tricks to avoid taking responsibility for gross professional misbehavior regarding her use of a private and unsecured e-mail server to conduct government business, as well as a tendency to blur the line between public trust and personal (often financial) interest.

Whenever accusations have arisen regarding these controversies, Hillary Clinton’s stock response is to alert the audience that she has long-ago apologized for a lack of judgement, implying that (1) this behavior represented a poor choice, rather than corruption or potentially criminal irresponsibility; and (2) this whole matter has been dealt with already (implying that it is our responsibility to now “move on”).

Another method used to give the impression of atonement while doing nothing of the kind involves phrases such as “I’m sorry that my words were misinterpreted,” or “I apologize if anyone took offense.” Such non-apologies slyly switch the roles of accused and accuser since they both imply that the person who has misinterpreted or taken offense at the candidate’s words is the guilty party. And, when all else fails, there’s always the passive voice to fall back on to explain that “mistakes were made.”

As already noted, the outsized examples we’ve seen this election cycle makes such behavior fair game for moral lessons delivered in lectures, editorials or sermons. My only problem with such moralizing is that it might be letting one party – all of us – off the hook.

After all, there are reasons why we ended up with the two candidates we have. And one of those reasons is that the voting public tends to punish anyone making a sincere apology by simply adding such contrition to a bill of indictment or using admission of guilt as the basis of further public shaming. So maybe the question we should be asking is whether the public needs to learn how to accept an apology as much or more than politicians need to learn how to give one.