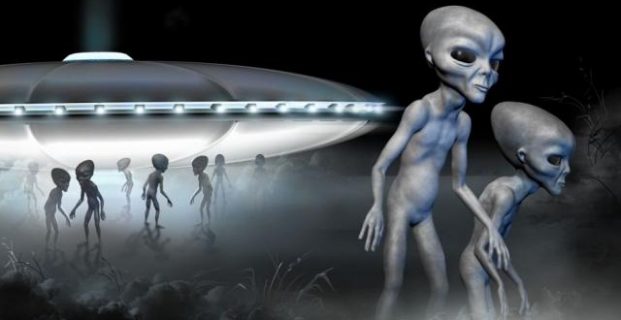 “It’s been six days since the Reticulan battle fleet entered Earth orbit, and today this unearthly race of reptilian shapeshifters issued their demands that Earth submit to their will and surrender mankind’s freedom, mineral wealth and women,” announced Rachel Maddow, wearing the metal bikini required of all concubines of the Reticulan High Command. “As yet, we have had no definitive statements from the Trump campaign regarding this latest twist to an already dramatic 2016 Presidential race.”

Meanwhile, CNN’s “Best Political Team,” broadcasting from an underground bunker in an unknown location, wondered how the Reticulan’s recent killing of every living thing in Europe might impact the dynamic of this race. “Clinton was already four points up in the polls before the alien invasion fleet blew out most of the nation’s communication grid,” said James Carville, his voice slightly muffled by the helmet of his radiation suit. “I don’t see why those numbers can’t hold until Election Day.

“I disagree,” replied David Gergen, having recently escaped from the alien’s lunar mining colony. “During times when the country perceives itself to be under a threat, Americans instinctively look to outsiders. And, fair or not, Donald Trump’s experience in the stressful world of “combat deal-making,” could become an asset, despite his inexperience fending off atomic laser cannons.”

With the conventions behind us, we enter a period when all news tends to get funneled into a single question: which Presidential candidate does it help? In 2008, the implosion of the finance industry primarily became a backdrop for the Obama and McCain campaigns to position themselves against one another, just as today’s wars in Syria and Iraq are boiling down to whether the buck should stop with the current Democratic administration or the Republican one which preceded it.

Given that we are selecting between two people who will have to deal with currently known and unanticipated problems and crises at home and abroad, it certainly makes sense to question which candidate is likely to do a better job coming up with creative solutions, reaching out for assistance when needed and executing on plans successfully. But does this necessarily mean that everything happening in the world, from a coup in Turkey to cop shootings in Texas, have their roots in the White House?

Every election, we are introduced to the “single-issue voter,” someone who feels so passionate about a single subject that they are willing to cast their presidential vote based on a candidate’s stand on this one issue alone. The issue might be domestic (such as immigration), or international (such as wars in the Middle East).

As parodied at the beginning of this essay, there does not seem to be a single question on any historic event that does not get covered by providing two minutes of news and analysis of the actual issue, followed by twenty minutes of discussion on how this issue will impact America’s choice for president.

No doubt, the next occupant in the White House will have inordinate powers that can impact these and many other matters. But the world and history will continue to turn in ways over which an American President (believe it or not) has little to no control. To see every twist and turn in the nation, planet and galaxy’s fate as one more backdrop to a presidential campaign, to be parsed based on who it impacts positively and negatively, is to truly become a “single-issue voter,” whereby every stand on every event becomes yet another manifestation of the single question of who to vote for in November.

It’s been my experience the ability to think critically about issues and the candidates plummets rapidly between the end of the conventions and Election Day as voters separate themselves into armed camps, filtering their incoming news feeds with information that supports what they already know to be true (with brief channel switching to opposition events in order to express requisite disgust).

Given the charged nature of this year’s nutso election, I expect that traditional rules of thumb for maintaining perspective (such as asking yourself if you’d be just as disgusted if the opposition speech you just tut-tutted came out of your preferred candidate’s mouth word-for-word) will not go into widespread use. But perhaps we can maintain an ounce of perspective by looking at each issue that comes before us in all its complexity, rather than treating the entire universe as a backdrop for a Presidential race that (thankfully) must end in November.