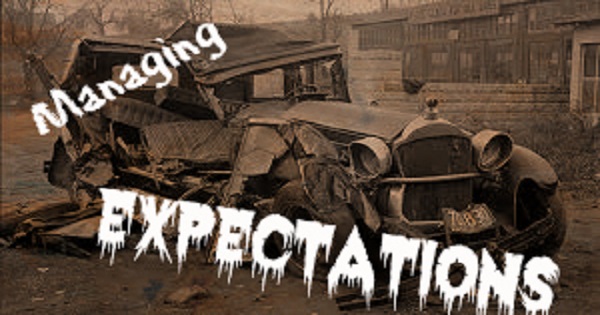 One of the most important rhetorical strategies for controlling debate is to set expectations, for yourself an others, in a way that maximizes your chances of success and – if appropriate – maximizes an opponent’s chances of failure.

One time-tested election tactic is to define the threshold for success as something other than winning. For example, if an opponent looks likely to win in a primary state, a rival can try to minimize the impact of that victory by claiming that anything less than a double-digit triumph would represent a loss by someone with their foe’s advantages (in terms of money, organization or local support).

Often, however, people fall into the trap of setting expectations for themselves too high. For instance, in 1968 then-sitting President Lyndon Johnson actually won the Democratic Primary in New Hampshire 50%-42% over insurgent anti-Vietnam War rival Eugene McCarthy. But because an overwhelming victory for a sitting Chief Executive was the expectation by both Johnson and the media, his win in New Hampshire was treated as a defeat, leading to his withdrawal from the race.

The failure to manage expectations helps to explain other events, such as the upset victory of Mitt Romney over President Obama in the first of three presidential debates during the 2012 election.

Supporters came up with all kinds of reasons for the President’s poor performance in this debate (one of the few periods during that election where the disciplined Obama campaign seemed to lose control of messaging), ranging from fatigue to altitude sickness. But the President’s real problem might have resulted from unrealistically high expectations related to oratory.

After all, when Obama emerged as the unexpected front runner in the 2008 Democratic primary and then went on to win the election, much of the credit was given to his success delivering inspiring speeches in front of large audiences. And his rhetorical style (which combined classic oratory with the energy associated with passionate church sermons) was genuinely impressive, especially after years of uninspiring speakers seeking and winning the Presidency.

People failed to realize, however, that delivering passionate pathos-driven appeals to large supportive audiences requires a different rhetorical skill set than debating a single opponent on live television, the type of event that requires a better balance between emotion and logic (logos). Such a setup actually favored Obama’s opponent, Mitt Romney, who had the added “advantage” of not being seen as a particularly skilled speaker. As a result, Obama performed below expectations set for him by those who unrealistically thought of him as the reincarnation of Cicero while Romney performed above the very low expectations set for him – thus “winning” that debate.

Like most phenomena associated with this year’s election, the expectations game is being played in hyperdrive with candidates (and the professional help they’ve hired) doing everything in their power to establish in advance what victory for everyone else must look like.

Hillary Clinton, for example, predicated her campaign on inevitability while insurgent Donald Trump has banked on momentum, causing friends, foes and commentators to discuss every up and down during the primaries in terms of how they contribute or confound expectations set by the campaigns themselves.

So are there lessons to be learned from the political campaign that might help those of us not running for office to achieve our goals?

Well, for one thing, the expectations game needs to be managed carefully so that the results defined as success for you remain likely while inflated expectations for an opponent also remain realistic. While it’s all well and good to “Pull a Scotty” by predicting something you know you can accomplish in two days will take six (and thus be hailed as a miracle worker when you finish the work in one-third the time), a track record of unrealistic “predictions” of performance can get you labeled as a “sandbagger,” i.e., someone who regularly sets low expectations in order to avoid work.

As a final thought, the expectations game needs to be built into a wider rhetorical strategy that plays to characterization of yourself or your foe that would be acceptable to a reasonable person. For example, before that 2008 Obama-Romney debate I just mentioned, attempts by the Obama campaign to declare Romney the superior orator would have likely not succeeded because they would have been seen as insincere (i.e., manipulative). But claiming that the debate format would advantage a Republican used to giving presentations before corporate boards would both set expectations and remind voters of a key Democratic branding point: that Romney was a plutocrat whom they should associated with every nightmare boss they ever worked for.