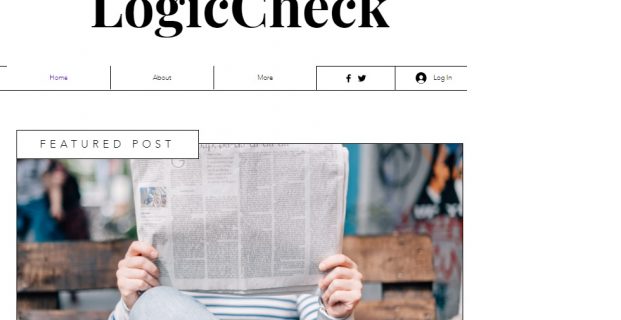 Just wanted to announce a new project called LogicCheck that will be using this coming election cycle to analyze the arguments behind the news.

Why logic checking?  Well cribbing from my initial post at the new site:
As the late Gary Gutting, professor of philosophy at Notre Dame and a regular philosophy columnist at the New York Times, pointed out:

“…strictly speaking, facts by themselves provide only the premises of a rational argument. To draw a conclusion, we also need a logical process of reasoning. Sometimes, the process is obvious and insisting on it a mere technicality: if the train is in fact bearing down on you, the conclusion is that you should get off the tracks. But in political debates, there’s often a questionable move from facts to a conclusion.”

In an age of unfiltered media, hyper-partisanship and political upheaval, it is tempting to seek refuge in basing one’s beliefs only on “the facts.” Most news sources promise to deliver to their readers “the truth” (i.e., true facts) and, when they don’t, there are increasing numbers of fact-checking organizations dedicated to providing quality control over statements coming out of the mouths of politicians or words that appear in advertisements and editorials.

The problem with making “truth” synonymous with facts that can be proven true or false is that facts are the building blocks of something larger: arguments and, as Gutting highlights, if we don’t understand the moves someone makes to get from facts to conclusion, we might not spot when people are using true facts to lie to us.

This is because facts – even unquestionably true ones – can be marshalled in support of unjustified, unjust or just plain false conclusions.
Logic check will be supplementing the all-important work of fact-checkers with analysis that looks at why we should or should not believe what we read or listen to by looking at reasons for belief, that crucial element that links what we are told (the facts) with the conclusions we are being asked to accept.

I’ll be reposting new LogicCheck entries here starting right after the Thanksgiving holiday.  But if you stop by LogicCheck now, I suggest you read the first “Getting Started” postings (they’re numbered) to get the hang of the ideas you will see developed there in the weeks and months to come.